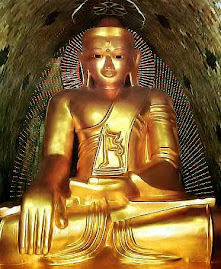 Padamyar Myatshin Buddha Image on the terrace of Shwedagon Pagoda

Parami means perfection. It refers to the culmination of certain virtues. Those virtues are cultivated as a way of purifying kamma and helping the aspiration on the way for enlightenment.

Someone can look after all mankind in the world to have peace of mind getting rid of suffering. People will call this miraculous person as a “Buddha”. They refuge upon him. When the life was in danger, they bear him in mind as one to rely on.

Buddha made a lot of the acquired virtues in the samsara of his life. At the end he had got the worldly characteristics, sympathy, loving kindness, intellect, power etc. As a result those abilities which do better than human beings, devas and brahmas the Buddha is real and unique.

The pious and noble-minded persons act selflessly. They would devote their lives to the welfare of others. They used to take aim at the liberation from the cycle of rebirths (samsara). So the acquired virtue is the only work of the noble-minded persons.

Every Bodhisatta might conduct such acquired virtue. In other word, he practised the ten perfections (dasa parami). It was also a prerequisite for Buddhahood. The parami had ten summaries and thirty elaborations of virtues. The ten summaries of perfections (Pali and English) are:

With multiplication of those ten perfections by the three i.e. Parami, Upaparami and Paramattha parami the result become 30 in number.

Gotama Bodhisattha strived to gain certain criteria of various paramis. It took times till four asankheyyas and one hundred thousand kappas had gone.

How long does one kappa take place? A warehouse of one yojana i.e. 12.72 miles is made full with the seed of mustard. After that one seed is thrown away once a hundred years. It's possible to run out of all seeds. However, the period of one kappa is not finished yet. This long period is about one “kappa”.

So long as the countless number the period between the enlightenments of the two Buddhas came to know as “asankheyya”. Thus, a period of four asankheyyas and one hundred thousand kappas was the shortest way to parami for the arising of one Buddha.

Posted by Nyan U.